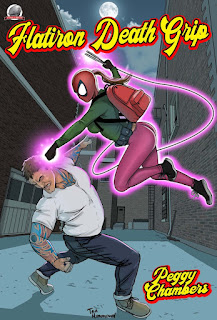 Airship 27 Productions is thrilled to announce its new thriller from Oklahoma based fantasy author, Peggy Chambers.

Teasy Sanders patrolled the streets at night wearing her lime green F. U. tee shirt from Flatiron University where she wished she could have attended. Like so many people in her neighborhood she tired of the criminals like the Gray Wolf gang who’d taken over. Gangs had killed her family and friends and she wanted her neighborhood back. She had the tools to put an end to the criminal activity, but the air pollution in the city was getting worse by the minute. And Teasy and her new gang may have found an answer to that.

The Civil Rights Act had once more been amended, and now included all life forms: humans, werewolves, vampires, and the most hideous, zombies. And suddenly the world was full of them. But could they save the world before everyone choked to death on the pollution?

Peggy Chambers delivers a fun romp through a world where fantasy becomes reality and the answer to the world’s problems could be sitting in an abandoned subway tunnel just waiting to be discovered. First time Airship 27 illustrator Gabriella Saenz provides the black and white interior illustrations while Canadian artist Ted Hammond the action themed cover.