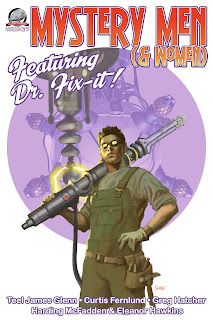 Airship 27 Production is thrilled to announce the released of Vol # 7 of their popular showcase series, “Mystery Men ( & Women ). This series was specifically created to allow New Pulp writers a stage onto which to introduce new, original characters inspired by the Gold Age pulp heroes and villains of old.

In this 7th Volume Teel James Glenn introduces his heroes of the future, The Exceptionals, fighting crime with unique skills and powers. Also premiering in this book is Harding McFadden & Eleanor Hawkins’ tough as nails agent known as The Ghoul.

While returning for a second appearance are Curtis Fernlund’s martial arts beauty, Kiri in another action packed tale and Greg Hatcher’s quirky Dr. Fixit is back for another whimsical adventure as he continues to build incredible gizmo weapons for super villains.

“Producing this series has been nothing by pure fun for us,” admits Airship 27 Production’s Managing Editor Ron Fortier. “Our New Pulp writers are inventing some truly amazing characters and it is our pleasure to bring them all to you.” Along with the writers on board, Award Winning Art Director Rob Davis provides the twelve interior illustrations and the super talented Adam Shaw offers up a Dr. Fixit cover. All part of a terrific new entry in a fan-favorite series.