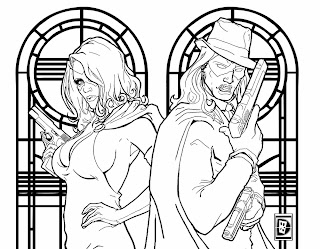 THE SPIDER & THE LADY

Veteran comics writer and New Pulp scribe, Ron Fortier, has just signed to write a black and white, bi-monthly comics series for Moonstone Books that will feature both The Master of Men, The Spider and the Sexy Pulp Vigilante, Domino Lady.  Fortier’s run will begin with issue # 3 due out early next year.

Each adventure will be a two-issue arc and feature a third pulp hero in a cameo role. Fortier’s enthusiasm for the project is bubbling over.  “I love both these classic pulp characters and though I’ve done prose stories of them in the past, the opportunity to chronicle new comic adventures was just too good to pass up.”

Pulp fans are aware of the logistical challenge such a series poses because both characters operate opposite coasts; the Spider haunts New York and its east coast environs while the Domino Lady is a native Californian living in Los Angeles.  So how does one write that kind of a team book?  “With lots of imagination and chicanery,” Fortier says answering that question with a mischievous smile.  “The last thing we wanted to do is force plots because of some geographical perimeters.  All I will say is that both will make appearances in every issue, but as to whether they are physically in the same place readers will just have to wait and see.”

A well known writer with over thirty-five years experience, Fortier is best known for his work on Now Comics’ GREEN HORNET and TERMINATOR – BURNING EARTH series.  He also wrote GENE RODDENBERRY’S LOST UNIVERSE for Tekno Comics.
Today he divides this time between his own writing projects and his duties as the Managing Editor of Airship 27 Productions, a leading publisher in the New Pulp Movement, which he began nine years ago with artist Rob Davis.  He currently writes the new prose adventures of Captain Hazzard and his own original pulp hero, Brother Bones; the Undead Avenger.

The artist on this new venture is twenty year professional, Michael Dorman. Dorman has worked in every capacity of graphic creating. His latest credits include penciling and inking Logan’s Run: Aftermath #4 and short stories in William Nolan’s Dark Universe for Bluewater Comics and the upcoming Immortal Deception #1 for Honey Badger Press.  "I'm thrilled to be working with a legend of the pulp world like Ron Fortier and excited to work with such icons as the Spider and Domino Lady. I look forward to bringing these exciting stories to visual life!"

Editing the series is Chuck Kennedy. Chuck is a veteran columnist and podcaster who has covered many of today’s brightest stars while commenting on the state of the comic book and retail industry and providing the occasional review when he can find the time. He is a stay-at-home father of triplets who still believe he is a were-bear.
“I knew Ron for over a year as a super-groovy person that everyone referred to as Captain and who had the coolest retro-lexicon of adjectives for everyday terms like amigo, hip, and any number of names my dad would recognize.  Then I found out he was a writer and damn did he become even cooler. Save yourself the time and just start reading his work, you’ll get to know him far better than I ever did.”

Kennedy goes on to say the team’s first issue should be out early next year with further Press Releases to announce the official date and the Diamond Solicitation listings.