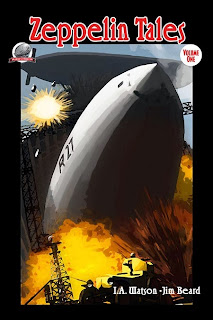 CLIPPERS OF THE CLOUDS

In the early 20th Century, German Count Ferdinand von Zeppelin pioneered the creation of rigid, lighter-than-air crafts capable of long distance flights.  During World War One they were adapted for military use as long range bombers wreaking havoc upon Great Britain from their lofty positions high above the clouds where fixed-winged fighters could not reach them.  After the war, the Zeppelins became pleasure ships utilized in luxury Trans-Atlantic Flights and highly popular.

The Golden Era of the airship was the 1930s, the same period as that of the pulps and it is no surprise their romantic images would inspire pulp writers of the time. The original monthly, ZEPPELIN STORIES, was produced solely to highlight these magnificent flying machines in exciting, colorful and fast paced adventures.  Now, Airship 27 Productions, itself bearing the image of these high-flying cruisers, launches a brand new series devoted to airships.

“I doubt there could be a more inevitable title for us than this one,” joked Airship 27 Managing Editor Ron Fortier.  “Even since we started publishing new pulp novels and anthologies, many of our readers would point to our logo and ask when we were going to get around doing a book about airships.”  Fortier states that as much as he was always  keen on the idea, other projects kept taking precedence.  Then a few years ago one of their regular contributors pushed the matter to the foreground.  “Writer Frank Schildiner wrote one day pretty much asking if we were ever going to get to this particular theme as it begged to be done.  I no longer had any legitimate excuse not to tackle the project.  We put out the word and within a few days two of our finest pulp writers answered the call.”

In this debut volume you will thrill to the exploits of Jim Beard’s new hero, Tracer Talbot, as he encounters a mysterious pirate airship and her crew.  While writer I.A. Watson sets off on an aerial adventure aboard an experimental Zeppelin built to explore the skies of an alien dimension.  Each high flying tale is wonderfully illustrated by Pedro Cruz and the book features a stunning cover by award winning artist Mike Fyles with Art Director Rob Davis providing the book’s overall design.

Join us as AIRSHIP 27 – ZEPPELIN STORIES Vol One soars into the stratosphere of the imagination on this, its maiden flight.

And as a downloadable PDF at our official website.
(http://robmdavis.com/Airship27Hangar/index.airshipHangar.html)
Posted by Ron Fortier at 7:53 AM