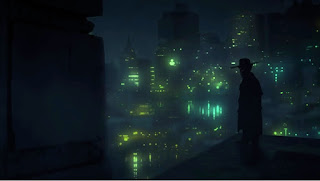 Franklin-Husser Entertainment LLC is thrilled to announce that they have reached out to New Pulp publisher Airship 27 in order to option the rights to Ron Fortier's character, Brother Bones, for an upcoming feature film.

“Brother Bones the Undead Avenger is a character I created over ten years ago,” Fortier recalls. “I just wanted to do my own homage to such great gun-totting vigilantes like the Shadow and the Spider. Little did I realize he would become so popular with our readers. They are forever clamoring for more of his macabre adventures.”

“New Pulp has such untapped potential,” co-founder Erik Franklin said. “There are so many vibrant, original characters that would be perfect for a cinematic adaption. Brother Bones has all that you could want in a story: exciting visuals, well-drawn characters, and each page is a cliff-hangar.”

“When Erik first showed me the book I immediately thought that Brother Bones would make a great movie.” Daniel Husser, co-founder of Franklin-Husser Entertainment LLC, commented. “The story is dark and full of action so it's perfect for us. Since we are working with Ron Fortier's creation, it is absolutely important to us that we stay faithful to the text. Many adaptations tend to change too much, damaging the original concept and we don't want that to happen.”

“It was very important to us to get Brother Bone's creator, Ron Fortier, involved with the project. He cares very much about his characters, and he only wants the best products to be associated with Brother Bones and Airship 27.” Erik said. “To that end, we discussed story possibilities at length, and we have determined what we think will be a great cinematic entrance for Brother Bones into the pantheon of cinematic heroes.”

A two minute test video was made and sent to Fortier to view.  “It virtually blew me away,” Fortier says. “Erik and Daniel had condensed in just two minutes what it had taken me almost four chapters to establish. They immediately captured the essence of the character and watching him come to life in that clip convinced me these two guys are going to make a fantastic Brother Bones feature. I couldn’t be more excited.”

The film is in its early planning stages, with the script being written by Ron Fortier and Erik Franklin. Seattle, Washington will double for Cape Noire, the setting in the Brother Bones novels. More details will be announced from Airship 27 and Franklin-Husser Entertainment LLC as they happen.

“This is going to be a big step forward for both our companies, and we look forward to presenting Brother Bones on the silver screen.” said Erik.

Airship 27 Productions is one of the pioneers of the New Pulp Movement and has been in operation for the past ten years producing beautiful quality novels and anthologies featuring both classic public domain and new pulp heroes.  Thus far there have been three Brother Bones books, a one shot comic book. Marshal Made Collectibles has produced several versions of Brother Bones action figures and soon Scaldcrow Games will be releasing an rpg module, “Ron Fortier’s Cape Noire” based on the Brother Bones adventures.  Www.airship27.com

Franklin-Husser Entertainment LLC, is an independent film production company based in Seattle, Washington.  Founded by life-long friends Erik Franklin and Daniel Husser, they share a love of escapist cinema, and have decided to create feature films dedicated to bringing exciting tales of action, suspense, and adventure to audiences around the world. With interesting twists on traditional genres, Franklin-Husser Entertainment LLC, combines intelligent screenplays with high-impact action. The company primarily produces action, sci-fi, comedy, martial arts and horror films, but keep their minds open to new and exciting ideas and creative possibilities. Their first film, Revenge of the Lost, is in the process of being distributed, and their second film is in post production.
www.fhentertainmentllc.com
Posted by Ron Fortier at 4:14 PM