THE TOWERS OF METROPOLIS 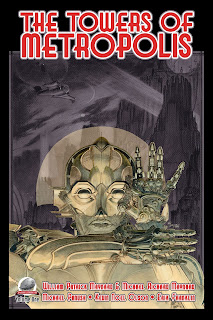 Airship 27 Productions is proud to announce the release of their newest title, “The Towers of Metropolis,” a prequel anthology based on silent sci-fi movie.

In 1927 German filmmaker Fritz Lang brought to the screen one of the most ground breaking sci-fi melodramas of all time based on the screenplay he co-wrote with his wife, novelist Thea von Harbou.  Set in a futuristic urban dystopia, the story follows the attempts of Freder, the son of the city’s ruler, and Maria, a citizen of the lower levels, to bridge the gulf separating the economic classes of the city. It is regarded as a classic and one of the first full-length movies in the genre.

“I first saw the film at the World Science Fiction Convention years ago,” reports Airship 27 Productions’ Managing Editor, Ron Fortier.  “It simply blew me away.  That a film this sophisticated and brilliant could be realized during the earliest days of movie making was astounding. Those images of that futuristic city and its underlying cautionary tale simply became a part of me. I never forgot them. To put together this anthology and revisit that world has been something truly special for all of us here at Airship 27. We hope our fans will enjoy our efforts here.”

Now five visionary new pulp writers have envisioned four dramatic tales which unfold in this amazing world prior to the events of that film. The book begins with a special introductory essay by author Fred Lang, Jr. and then William & Michael Maynard join forces with Michael Panush, Kevin Noel Olson and Erik Franklin to guide readers back to those vaulted, shining Towers of Metropolis in this new collection inspired by Lang’s masterpiece.

“Metropolis is something truly unique in the annals of science fiction history,” Fortier concludes. “I believe we’ve done it justice with The Towers of Metropolis.”

Available at Amazon in both hardcopy and on Kindle.