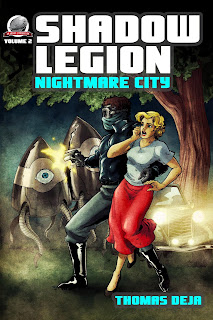 AIRSHIP 27 PRODUCTIONS
Presents
THE RETURN OF THE SHADOW LEGION

“The first book served to introduce us to these amazing characters,” explains Airship 27 Productions’ Managing Editor Ron Fortier. “Thomas Deja’s imagination is firing on all cylinders as he whips up unique, diverse heroes, each with his or her own deadly challenges as is evidenced in this second outing.”

The superheroes of Nocturne, Florida, known as the Shadow Legion, are back but this time each is going solo.  In a quartet of new adventures, each must confront weird and bizarre threats to their city and its people.

The blind Ferryman, who communes with ghosts, must save an innocent child from an eternal nightmare while the battling Nightbreaker confronts an old foe from his past with the ability to rain down death and destruction on the city.  Meanwhile the Black Talon is kidnapped by a powerful necromancer whose obsession is to destroy all superheroes. And finally the beautiful Dreamcatcher must ally herself with a bizarre living rag-doll in her search for a maniacal fiend.

Adding to the fun of this volume are 12 black and white interior illustrations by Canadian artist Vincent Marchesano. His first work for Airship 27, while the cover is provided by the always amazing Zachary Brunner. Art Director Rob Davis adds his designing touch and voila, a terrific new chapter in superhero pulps is ready to entertain our loyal fans.

Here are four fast paced adventures chronicling the exploits of amazing heroes in their eternal battle with the forces of darkness.  The Shadow Legion fights on.