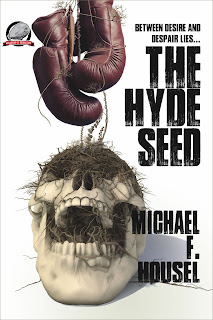 At one time boxer Pepe Rodriguez believed his only opponents were the men he faced in the ring. But when his own self-doubts derailed his boxing career, Pepe soon learned to understand one’s own personal demons are the most deadly foes of all.  Years later they return to once again threaten any chance he has of real happiness and contentment. In the end he will have to endure one final bout against his darker side or risk losing his soul to despair forever.

With the Hyde Seed writer Michael Housel delivers an insightful cautionary tale about the duality of life and the struggles all of us must face in one way or another.

“This is only the second novella we’ve ever published,” reports Airship 27 Productions Managing Editor Ron Fortier.  “We generally prefer full length novels, but upon reading it, we realized it was a perfect suspense thriller for the format and we are very proud to bring it to our readership.” The book features a cover by Ash Arceneaux and interior illustrations by Pedro Cruz.