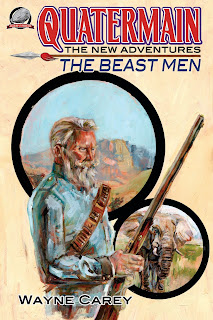 Airship 27 Productions is proud to announce the release of the third volume in their series, Allan Quatermain – The New Adventures; based on the classic hero created by H. Rider Haggard. “Allan Quatermain & the Beast Men” is a full length novel by writer Wayne Carey.

When all the villagers of several veldt kraals mysteriously go missing, Allan Quatermain finds himself embroiled in one of his most baffling African adventures. Whispers among the Zulus claim weird beast men, half-human and half-cat, are responsible for the abductions. Quatermain and his companion Mnqoba begin their investigation skeptic of the rumors but at the same time baffled by the unexplained disappearances of so many so quickly.

Their mission leads them to a ranch owned by British Doctor Emerson Blake and his beautiful wife Emma. Both scoff at the stories of the beast men and do their best to convince the famous hunter that there must be a logical explanation. Quatermain is almost won over when, after a new attack by the creatures, Mnqoba is counted among the missing. Now he must confront the reality; someone or something has brought death to Zululand?

“Quatermain is a classic pulp hero fans can’t get enough of,” says Airship 27 Productions Managing Editor Ron Fortier. “It is the lore of Africa, at a time when adventure and mystery went hand in hand. When Wayne Carey brought us this manuscript, we were overjoyed.”

Writer Wayne Carey whips up a thrilling old fashion adventure yarn featuring one of the most endearing heroes in all of literature.  British artist Graham Hill provides the cover and graphic illustrator, Clayton Hinkle, the nine black and white interior illustrations. “Allan Quatermain & the Beast Men,” is pure pulp action from start to finish.

Available now from Amazon in paperback and on Kindle.