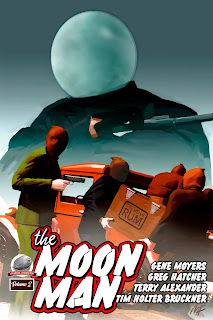 Airship 27 Productions is proud to announce the releases of their second volume in their series of all new Moon Man adventures.

In the middle of the Great Depression, many unscrupulous people found ways to enrich their own wealth while ignoring the plight of those less fortunate. It was an injustice the law could not remedy. Men like Detective Sgt. Stephen Thatcher found themselves at odd with the very laws they were sworn to uphold. But, unlike the others, Thatcher solved his moral dilemma by creating an alter-ego who would rob from the very rich and give to the poor. Wearing a bizarre argus glass globe over his head, the Moon Man became the Robin Hood of Great City and one of pulpdom’s most endearing classic heroes.

“The Moon Man was one of the most original pulp heroes of them all,” says Airship 27 Productions’ own Managing Editor, Ron Fortier. “His adventures were always fun and unique unlike any other character from the Golden Age of the Pulps.”

Now writers Gene Moyers, Greg Hatcher, Tim Bruckner and Terry Alexander have whipped up four new stories pitting the Moon Man against a variety of foes and challenges. From a group of street kids emulating him to deadly Nazi saboteurs, the globe wearing champion of the underdogs, finds himself battling as never before to see that justice will triumph in the end.